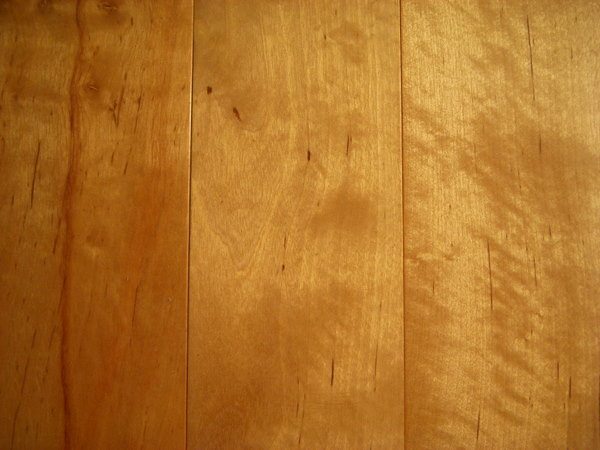 Birch is a medium density very stable hardwood which will not move / expand / contract much when exposed to differences in moisture content changes.

Many trees frequently show highly figured flame and ripple and a degree of colour in the heart.  Birch is difficult to plane so will tear easily.  Our planed boards will frequently show some quite big tears on at least the reverse side of the board.  Very sharp blades required! Or lots of sanding, but it sands easily.

Birch polishes beautifully to a golden colour. The local birch which we tend to access grown in the north of Britain is slow grown, fine grained and thus relatively hard.  It thus makes a useful general furniture timber whether it be tabletops or cabinetry.

SPALTED BIRCH :  Like Beech,  Birch spalts easily as it rots quickly on the woodland floor.  Here is a little info on Spalting lifted from our ‘Spalted Beech’ wood types page,  all of which applies to Birch:

Effects. There are many different types of effects created – from a loss of pigmentation producing a patchy or marbled effect of different shades of cream & brown, through soft white rot pockets to the most desirable & striking black, brown or red lines.

What is Spalting? Many timbers can spalt but Beech is one of the most common. Spalting is a term used to describe the process by which certain fungi grow on dead or fallen trees and after colonizing the wood via travelling up the wood cells from the ends or from broken off branches,  leave a most attractive pattern. The process takes 2 to 3 years to reach the ideal stage to cut & season the timber.

The black lines are zone lines created by different species of fungi erecting barriers around their territory! There are primary colonizers who come first and establish territories and then have to defend them against secondary colonizers who are only able to colonize the wood because the primary colonizers have changed the ph of the wood & its structure.  A microscopic army!  If left unchecked eventually the whole tree is eaten & consumed, part of nature’s process of dealing with dead & fallen trees.

Working the timber. Where hard & soft zones are adjacent to each other on a board it is essential to take care with sanding as any soft areas will tend to be sanded away most easily,  leaving hollows.   The soft areas are the most white bits on the boards,  but some good spalted boards will not contain any soft areas while others will be almost entirely soft.

Safety.  Once kiln dried the fungi spores are inactive but some can cause some throat irritation when the wood is sanded –  but we are assuming you will be using proper dust extraction or protection whatever the timber!