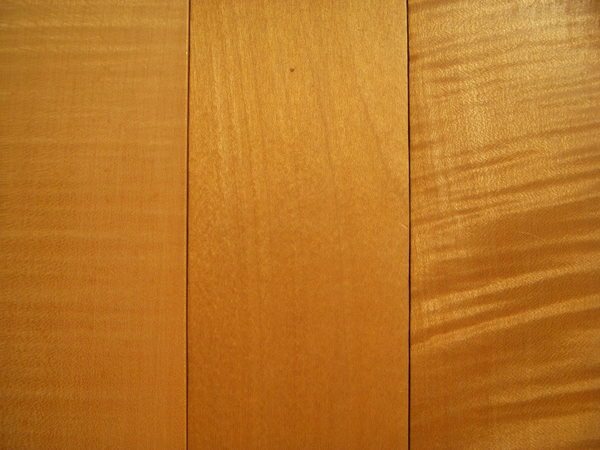 Sycamore is a variety of MAPLE (acer) common to the UK,  in the past more frequently referred to as ‘Plane’ or ‘Plane Tree’  in Scotland but NOT to be confused with LONDON PLANE.   The best figured examples are highly prized all over the world as tonewoods for musical instrument making and many Scottish Sycamores have for many years been exported to Europe for tonewood (musical instrument) production.  It naturally makes a prime furniture timber too.

Sycamore is generally stable – small movement in service – it wont warp much if subjected to moisture content changes. It is generally easy to cut, plane, chisel, sand and polish,  being a smooth, close grained hardwood.  It is naturally more antibacterial than some other species,  so ideal for kitchen worktops and chopping boards etc.  Some staining may be evident due to the abundant sugars in the tree attracting mould growth in the early stages of seasoning,  particularly in any sapwood.

There is a wide variation in density from one type to another, but it is generally medium.

The pictures accompanying this script are of what the surface may look like after 5 to 10 years – when it will have darkened considerably.  It is much paler, close to white sometimes,  when it is fresh and new.  It is difficult to keep it that white for long and so it is better that we show it in its finished colour.

It is incredibly prone to woodworm, especially in the sap.  We endeavour to cut out any woodwormed areas but some may be missed.  It is quite common for the trees to arrive at the sawmill already carrying the woodworm beetles which are present in the woodland.   When we see them we treat them with an insecticide and remove as much bark and sapwood (which they prefer) as possible.  Some may survive the sawmilling process and may then continue to tunnel during the air-drying process.  We are fairly confident, but cannot guarantee, that the finished kiln-dried product is free of activity,  and only about 5% of the production is affected in the first place.  If you see woodworm holes it is most likely old activity.

Sycamore is likely to have at least some mild ripple which may not show until after final finishing and perhaps only on quarter-sawn faces.  However medium or even heavily pronounced ripple or flame figure is common and greatly adds to the attractive quality of the timber.

To bring out the figure in its best light, finish the timber cleanly, either by sharp plane, scraper or very fine sanding, or all 3; then use either an oil or shellac (french polish),  both of which sink down into the timber and highlight the end-grain areas of the surface where undulating grain causes the ripple or flame ‘figure’.

Finished with a laquer or varnish, which sit more on the top, these end grain areas will be masked and the light cannot be reflected back in such a way as to reveal the flashy grain.  However certain types of lacquer and varnish may be more likely to keep the timber whiter, again due to the lack of penetration of polish into the timber, which may be a better aim of the maker.

There are many different varieties of MAPLE (acer),  of which SYCAMORE being an ‘acer’ can be described as one and although most sycamore timber is recognisable as such some is less clear looking at just the wood, not the tree,  and if a suspected sycamore log has not been seen standing as a tree by Patrick with its leaves or buds to be able to be positively identified as a sycamore then the timber may be described more generally as ‘maple’ and may be listed on our website as ‘maple’.  Most acers / maples are presented for sale to us by forestry contractors or woodland owners pre-felled or as wind-blow clear up and thus it is frequently the case.

In addition to sycamore the maple family include field or common maple,  Norway maple and many american or japanese maples planted and grown in the UK – many country estates have examples of non-native species to offer,  planted in the 1800s and now reaching the end of their lives and US maples were popular.

There are subtle variations between the timbers,  some being hard, dense, heavy or close grained and others much less so.  There can be a wide variation in the density from one tree to another,  even within the same type of maple,  depending on where it was grown.

Sycamore needs special treatment to avoid unsightly staining caused by the afore-mentioned mould growth attracted to the sugars in the tree.  Our first step is to usually only buy sycamore that has been felled or wind-blown in the absolute depth of mid-winter – Christmas time is usually about right – when the sap is most likely to be down.

However these days most winters are so mild that the sap barely retreats and thus it is maybe only about one winter out of 5 that the conditions are right for prime Sycamore felling, coinciding with the time a tree is being offered for sale to us.

When we have acquired good prime Sycamore, we then do our best to mill the timber into boards as quickly as possible, preferably during a prolonged spell of cold, bright, clear frosty weather – again a thing of the past now, sadly, in British winters,  even here in central Scotland.  Thus we are now looking at about only 1 in 10 years being perfect for Sycamore drying!

After milling the timber must be surface dried quickly with minimal contact with drying stickers, which always cause staining – generally that is by a method called end-rearing.  We raise the boards up on their ends and lean a quantity together with a sticker at top and bottom only to keep them apart.  Needless to say,  without the normal many stickers every foot and the huge weights placed on the stacks horizontally to restrain the movement during seasoning,  the timber is apt to warp, twist, bow and cup all over the place if it is anything other than perfectly straight in both directions.   Wastage is ridiculous and building the boards into a stack to go in the finishing kiln is impossible.  Thus we will only plank and end-rear the very straightest of timbers, examples of which are rare things to be offered for sale in our part of the world.

Hence the reasons why we do not have much prime sycamore for sale!

We do put a lot of the sycamore we get into very thick sections for mantels, beams, furniture legs or eventual resawing.  The thick sizes reduce the amount of warping etc when they season and allow less stickers to be used for conventional horizontal stacking; also if there is surface staining there is enough material to allow it to be planed out.  Generally thick sizes (70mm plus) will not dry as clear white and may have more splits.

It is a stable timber,  easy to machine  & finish,  even when figured.  Has to be very carefully cut & seasoned to avoid excessive staining in the timber.